In the second part of our mini-series on monitoring and evaluating policy influence, Arnaldo Pellini, Research Fellow at the Overseas Development Institute, explores a project supporting research centres in Australia to monitor their impact on health policy in Southeast Asia and the Pacific. Arnaldo explores the main challenges and makes some recommendations for others looking at the M&E of policy influence. 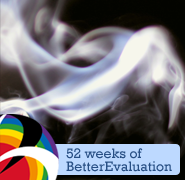 In the second part of our mini-series on monitoring and evaluating policy influence, Arnaldo Pellini, Research Fellow at the Overseas Development Institute, explores a project supporting research centres in Australia to monitor their impact on health policy in Southeast Asia and the Pacific. Arnaldo explores the main challenges and makes some recommendations for others looking at the M&E of policy influence.

Read part one of the mini-series here.

When I think about measuring policy influence of research the main character of 1995 Wayne Wang’s movie Smoke often comes to mind. At some point in the movie he tells the story of how an Elizabethan

This story reminds me that with creativity and maybe imagination it is possible to measure the influence of research on policy, which can seems as impalpable as smoke.

In this blog I describe how ODI’s Research and Policy in Development programme supported four Australian university centres conducting policy research funded by AusAID in the health sector in Southeast Asia and the Pacific under the Health Knowledge Hub initiative (HKH) between 2008 and 2013, to measure their influence on health policy.

The HKH initiative set up knowledge hubs at four universities to establish collaborations within academia and with policy and practitioners to bring research evidence into policy decision processes and improving the effectiveness of health systems in the Asia–Pacific Region.

We anticipated some of the challenges would be:

Hovland’s framework helped the Hubs to include indicators of uptake of knowledge products in their logframe monitoring, e.g. web stats and qualitative indicators of contributions to policy change in the form of changes in attitudes, perception and legislation, assessed through case studies and stories of change.

Here are a couple of examples. We agreed that the original logframe included policy influence indicators that were too general such as ‘changes in policy / practice / use in topic / theme area’. These were made more specific on the types of policy change and expanded to include changes in attitudes and perceptions by policy-makers or practitioners who are then able to act as intermediaries to influence policy-makers. We also agreed to include qualitative case studies developed through interviews with policy-makers, practitioners, and capacity development participants as means of verification of these types of changes.

A second example: the original logframe indicator related to publications was to ‘identify particularly significant / high quality studies / papers in terms of contribution to knowledge.’ Following our discussion we agreed that as the hubs publish a large number of publications it would be useful to monitor the uptake of all of them by tracking requests, online access/downloads, and references in other research or policy documents. This information would complement other indicators and be a proxy of the success and influence of the policy research pieces produced by the hubs.

Stories of change are one way to document the impact of research. They are short pieces that do not focus on the research process, but describe where research led to changes in policy, practice, knowledge, behaviour and/or attitudes. The Hubs agreed to use them to document the influence of research and capacity development activities on key stakeholders and counterparts in Southeast Asia and the Pacific, based on a suggested structure derived from work RAPID did at the Vietnam Academy of Social Science. Developing the SoCs wasn’t straightforward; the early drafts focused on activities and outputs rather than changes in policies or attitudes. However, they ultimately drew up some interesting stories that complemented the other M&E areas.

Reflections on lessons learned from this experience