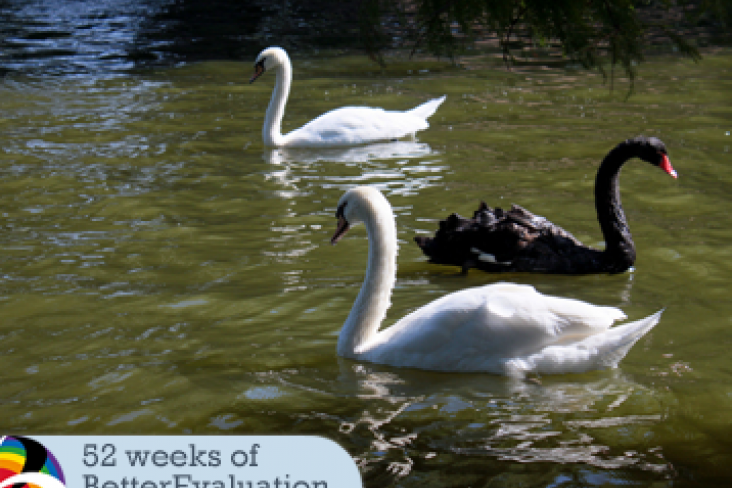 The 4th edition of Qualitative Research and Evaluation Methods by Michael Quinn Patton will be published in mid-November, 2014. A new feature is one personal “rumination” in each chapter.

In these ruminations, Patton reflects on issues that he explains have “persistently engaged, sometimes annoyed, occasionally haunted, and often amused me over more than 40 years of qualitative research and evaluation practice.  In these ruminations I state my case on the issue and make my peace with it.” Because these issues have global relevance, Patton has agreed to post his ruminations on BetterEvaluation to stimulate further reflection among evaluators generally.

An anecdote is nothing more than a short story about something. But anecdote has become an epithet. “That’s just anecdotal” is a common way of dismissing qualitative data. For example, an article on science attacking qualitative case studies insisted, “The plural of anecdote is not evidence” (Benson, 2013, p. 11).

Sometimes. Cherry-picked anecdotes to supposedly “prove” a predetermined position come across as what they are: argumentative advocacy, not evidence. But the systematic, intentional, and careful recording of purposefully sampled anecdotes (stories) can become evidence when rigorously captured and thoughtfully analyzed. Suppose you’re doing fieldwork and ask eight knowledgeable people about an event you’ve heard about. They give you 15 anecdotes. Look for patterns across the anecdotes. When in doubt about the veracity of a particular anecdote, check it out with others. That’s qualitative inquiry using anecdotes as data. But even single anecdotes can be informative. Consider this example.

Fred Shapiro, editor of the Yale Dictionary of Quotations, has the job of tracking down and verifying the original source of widely used quotations. He traced the quote “The plural of anecdote is not evidence” to Raymond Wolfinger, political scientist, University of California, Berkeley, and e-mailed him for confirmation. Wolfinger responded with an anecdote:

I said “The plural of anecdote IS data” sometime in the 1969-70 academic year while teaching a graduate seminar at Stanford. The occasion was a student’s dismissal of a simple factual statement—by another student or me—as a mere anecdote. The quotation was my rejoinder. Since then I have missed few opportunities to quote myself. The only appearance in print that I can remember is Nelson Polsby’s accurate quotation and attribution in an article in Political Science and Politics in 1984.

Shapiro goes on to note, “What is interesting about this saying is that it seems to have morphed into its opposite: ‘Data is not the plural of anecdote.’”

The word anecdote originally meant “secret or private stories,” from the French anecdote, derived from the Greek anekdota, “things unpublished” or “not given out.” The word entered our language to denote stories that weren’t given out to the public, meaning the hidden accounts that didn’t make the authorized biography, the formal minutes of the meeting, or the official version of events. Diaries are a classic source of anecdotal material. Fadiman (2000) traces the etymology and history of, and the changing connotations associated with, the word anecdote, including the contemporary scholarly enterprise of collecting and publishing entertaining, insightful, inspirational, and titillating anecdotes. Having studied anecdotes, he takes on the question of their value.

Men of high philosophic mind have valued the anecdote less for its capacity to divert, more for its power to reveal character. This value was first classically formulated by Plutarch, quoted by Boswell: “Nor is it always in the most distinguished achievements that men’s virtues or vices may be best discerned; but very often an action of small note, a short saying, or a jest, shall distinguish a person’s real character more than the greatest sieges, or the most important battles.”

From anecdotes, thought Prosper Merirnee, one “can distinguish a true picture of the customs and characters of any given period.” Nietzsche was confident that “three anecdotes may suffice to paint a picture of a man.” Isaac D’Israeli, whose Dissertation on Anecdotes affords a perfect reflection of his time’s anecdotal preferences, thought anecdotes accurate indices to character: “Opinions are fallible, but not examples.” Says Ralph Waldo Emerson: “Ballads, bons mots, and anecdotes give us better insights into the depths of past centuries than grave and voluminous chronicles.” His contemporary William Ellery Channing agreed: “One anecdote of a man is worth a volume of biography.” (pp. xxiii)

Dubious? Consider what this single anecdote reveals about a person, a people, and a colonial empire. It is told by English author J. R. Ackerley from his travels in India sometime around 1930.

Talking of snakes, Mrs. Montgomery told me that once she nearly trod upon a krait—one of the most venomous snakes in India. “I was going back in the evening to my bungalow, preceded by a servant who was carrying a lamp. Suddenly he stopped and said, ‘Krait, Mem-sahib!’—but I was far too ill to notice what he was saying, and went straight on. Then the servant did a thing absolutely without precedent in India—he touched me! He put his hand on my shoulder and pulled me back. Of course if he hadn’t done that I should undoubtedly have been killed; but I didn’t like it all the same, and got rid of him soon after.”

Fadiman, as an anecdote collector and scholar, is careful not to overgeneralize from a single anecdote. He has commented that, like a statistic taken out of context, a single anecdote, unless measured against the whole record of a life, may be a damned lie. But he ruminates that a reasonable and diverse number of anecdotes drawn from different circumstances and phases of a life may give us “an imperfect yet authentic sense of character.” In the end, though, he comes to see anecdotes as data, though he doesn’t use that word. Anecdotes are naturally occurring, readily available, and insight-generating data. He concludes thus about the overall value of anecdotes:

If one were asked to name the kind of book that within one set of covers most adequately reflects the sheer multifariousness of human personality, it might well be a book of anecdotes. . . .

A reasonably ample gathering of anecdotes, drawn from many times and climes, may reconcile us to our human nature by showing us that, for all its faults and stupidities, it can boast a diversity to which no other animal species can lay claim. (Fadiman, 2000, pp. xxiv)

In the course of discussing this rumination while doing fieldwork together, colleague Jamie Radner shared two anecdotes with me that illustrate and illuminate anecdotes as data and evidence. With his kind permission (and a caution that these are vivid memories but, being decades old, may be off in one or more detail), I share them here:

Decades ago I worked for Amnesty International (AI). At the heart of AI’s effectiveness was generating impartial, reliable, credible evidence about what was going on in all kinds brutal places. Our biggest staff unit and biggest investment was therefore our research department, packed with smart, well-trained PhDs. A core research method was collecting stories from refugees. Definitely, anecdotes in both the old and current senses. These were then rigorously analyzed to assess where there was independent corroboration coming through, to push for inconsistencies, to discover patterns (ah, that word—brings back memories). Was the result good evidence? You bet. Good enough, I liked to think, to at least occasionally save lives. And this brings to mind . . .

Again, decades ago, a colleague working for Peace Corps in Africa described a scene to me in a remote village in a brutally run country. There was a long line of villagers waiting at some make-shift station. He asked what was up and learned that they were waiting to talk, one by one, to a representative from AI. Everyone knew that such talk, in such a place, was very dangerous. So at a certain point he asked a villager he knew why so many people were running this risk. I’ll never forget the answer: “We trust Amnesty International.”

Scientific observations often begin as anecdotes, for example, Newton getting inspired by observing a falling apple, stimulating him to ponder what we now know as gravity, or so goes the legendary anecdote. Anecdotes yield hypotheses and questions. Was that anecdote an interesting but idiosyncratic story, or is it part of a pattern? Qualitative inquirers examine multiple anecdotes for patterns, insights, and meaning.

Nicholas G. Carr (2010), an American writer who has published books and articles on technology, business, and culture, has labeled anti-anecdotalism as antiscience.

We live anecdotally, proceeding from birth to death through a series of incidents, but scientists can be quick to dismiss the value of anecdotes. “Anecdotal” has become something of a curse word, at least when applied to research and other explorations of the real.. . . . The empirical, if it’s to provide anything like a full picture, needs to make room for both the statistical and the anecdotal.

The danger in scorning the anecdotal is that science gets too far removed from the actual experience of life, that it loses sight of the fact that mathematical averages and other such measures are always abstractions. (Carr, 2014)

So here’s how I now respond to the dismissive “It’s just an anecdote.”

It’s just an anecdote when told in isolation and heard by amateurs. But I’m a professional anecdote collector. If you know how to listen, systematically collect, and rigorously analyze anecdotes, the patterns revealed are windows into what’s going on in the world. It’s true that to the untrained ear, an anecdote is just a casual story, perhaps amusing, perhaps not. But to the professionally trained and attuned ear, an anecdote is scientific data—a note in a symphony of human experience. Of course, you have to know how to listen. (Smile knowingly.)

On the other hand, this entire rumination may be viewed as evidence that I have moved into an advanced stage of anecdotage. “In youth we sow our wild oats, in old age our tame anecdotes” (Fadiman, 2000, p. xiv).

And a final cautionary note: Don’t confuse anecdotes with anecdata: “information which is presented as if it is based on serious research but is in fact based on what someone thinks is true” (Davidson, 2014).

The BetterEvaluation page on stories has specific suggestions for collecting, analysing and reporting stories in evaluation.