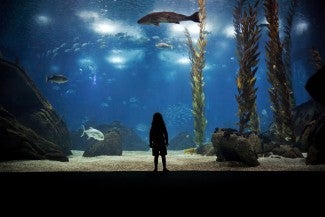 The fish bowl activity is used to manage group discussion.

The general idea is that rather than a large group having an open discussion about something, which can be difficult to handle and often only benefits a few active participants, a smaller group (ideally 3 – 6 people) is isolated to discuss while the rest of the participants (maximum of 50 people) sit around the outside and observe without interrupting. Facilitation is focused on the core group discussion. Less people = easier to facilitate.

"Fishbowls" are useful for ventilating “hot topics” or sharing ideas or information from a variety of perspectives. When the people in the middle are public officials or other decision-makers, this technique can help bring transparency to the decision-making process and increase trust and understanding about complex issues. Sometimes the discussion is a “closed conversation” among a specific group. More often, one or more chairs are open to “visitors” (i.e., members of the audience) who want to ask questions or make comments. Although largely self-organizing once the discussion gets underway, the fishbowl process usually has a facilitator or moderator. The fishbowl is almost always part of a larger process of dialogue and deliberation." (Knowledge Sharing Toolkit, 2014)

‘Fish battle’: ‘Instead of the typical 3-6 seats in the middle for the talking participants, here it’s a one-on-one debating the pros and cons of a given subject. Participants outside the duelling duo tend to take one side and when they want to enter the battle they gently tap the shoulder of the duellist – civilised fishes we are! An alternative to this option is the Samoan circle. Lessons about the fish battle option include’ :

'Fishbowl technique' is referenced in: