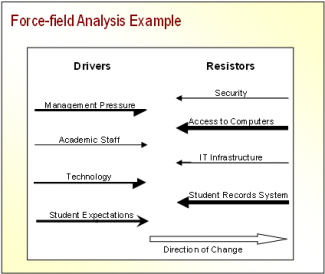 A force field analysis is used to support the decision making process by providing a detailed overview of the variety of forces that may be acting on an organisational change issue.

"Force field analysis is best carried out in a small group of about six to eight people using flipchart paper or overhead transparencies so that everyone can see what is going on. The first step is to agree on the area of change to be discussed. This might be written as a desired policy goal or objective. All the forces in support of the change are then listed in a column to the left (driving the change forward), whereas all forces working against the change are listed in a column to the right (holding it back)." (Ramalingam, 2006)

"The Food and Agriculture Organization of the United Nations (FAO) adapted force field analysis, adding an extra element of the organisation’s control over a situation. For example, in an attempt to improve success in afforestation and reforestation programmes, the agency in question might list all the driving forces and restraining forces. It then rates each force by its importance and by the degree of control it exerts over that force. The totals are then calculated and a table developed (Table 2). This means that for each force, the higher the total of importance and control, the more impact the agency should have in trying to address that force. In addition, if the agency can find some forces that explain others, the effectiveness of its actions will be greater. For example, suppose that ‘improved operational planning’ can reduce ‘losses to fires and grazing’ as well as ‘poor procedures for hiring and paying field workers’. Because it has these cross-impacts, in this example, the agency decided to give special attention to ‘operational planning’." (Ramalingam, 2006) 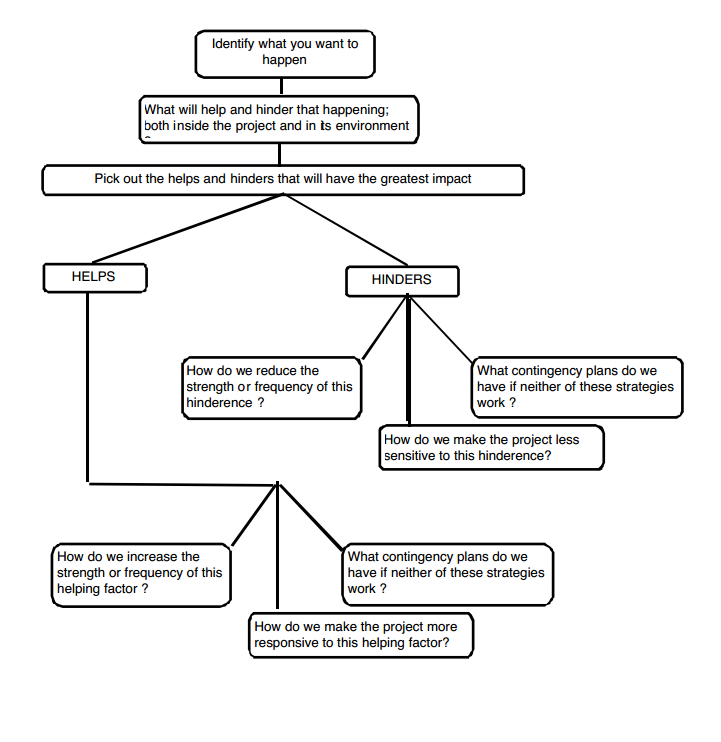 Ramalingam, B. Overseas Development Institute, Research and Policy in Development Programme. (2006).Tools for knowledge and learning. Retrieved from website: https://odi.org/en/publications/tools-for-knowledge-and-learning-a-guide-for-development-and-humanitarian-organisations/

'Force field analysis' is referenced in: