Qualitative Comparative Analysis (QCA) is a means of analysing the causal contribution of different conditions (e.g. aspects of an intervention and the wider context) to an outcome of interest.

QCA starts with the documentation of the different configurations of conditions associated with each case of an observed outcome. These are then subject to a minimisation procedure that identifies the simplest set of conditions that can account for all the observed outcomes, as well as their absence.

The results are typically expressed in statements expressed in ordinary language or as Boolean algebra. For example:

QCA results are able to distinguish various complex forms of causation, including:

QCA is able to use relatively small and simple data sets. There is no requirement to have enough cases to achieve statistical significance, although ideally there should be enough cases to potentially exhibit all the possible configurations. The latter depends on the number of conditions present. In a 2012 survey of QCA uses the median number of cases was 22 and the median number of conditions was 6.  For each case, the presence or absence of a condition is recorded using nominal data i.e. a 1 or 0. More sophisticated forms of QCA allow the use of “fuzzy sets” i.e. where a condition may be partly present or partly absent, represented by a value of 0.8 or 0.2 for example. Or there may be more than one kind of presence, represented by values of 0, 1, 2 or more for example. Data for a QCA analysis is collated in a simple matrix form, where rows = cases and columns = conditions, with the rightmost column listing the associated outcome for each case, also described in binary form.

QCA is a theory-driven approach, in that the choice of conditions being examined needs to be driven by a prior theory about what matters. The list of conditions may also be revised in the light of the results of the QCA analysis if some configurations are still shown as being associated with a mixture of outcomes. The coding of the presence/absence of a condition also requires an explicit view of that condition and when and where it can be considered present. Dichotomisation of quantitative measures about the incidence of a condition also needs to be carried out with an explicit rationale, and not on an arbitrary basis.

Although QCA was originally developed by Charles Ragin some decades ago it is only in the last decade that its use has become more common amongst evaluators. Articles on its use have appeared in Evaluation and the American Journal of Evaluation.

For a worked example, see Charles Ragin’s What is Qualitative Comparative Analysis (QCA)?, slides 6 to 15 on The bare-bones basics of crisp-set QCA.

[A crude summary of the example is presented here]

In his presentation Ragin provides data on 65 countries and their reactions to austerity measures imposed by the IMF. This has been condensed into a Truth Table (shown below), which shows all possible configurations of four different conditions that were thought to affect countries’ responses: the presence or absence of severe austerity, prior mobilisation, corrupt government, rapid price rises. Next to each configuration is data on the outcome associated with that configuration – the numbers of countries experiencing mass protest or not. There are 16 configurations in all, one per row. The rightmost column describes the consistency of each configuration: whether all cases with that configuration have one type of outcome, or a mixed outcome (i.e. some protests and some no protests). Notice that there are also some configurations with no known cases. 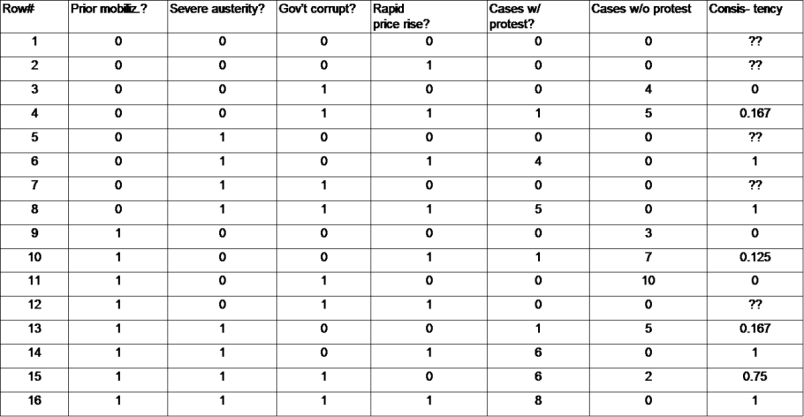 Ragin’s next step is to improve the consistency of the configurations with mixed consistency. This is done either by rejecting cases within an inconsistent configuration because they are outliers (with exceptional circumstances unlikely to be repeated elsewhere) or by introducing an additional condition (column) that distinguishes between those configurations which did lead to protest and those which did not. In this example, a new condition was introduced that removed the inconsistency, which was described as  “not having a repressive regime”.

The next step involves reducing the number of configurations needed to explain all the outcomes, known as minimisation. Because this is a time-consuming process, this is done by an automated algorithm (aka a computer program) This algorithm takes two configurations at a time and examines if they have the same outcome. If so, and if their configurations are only different in respect to one condition this is deemed to not be an important causal factor and the two configurations are collapsed into one. This process of comparisons is continued, looking at all configurations, including newly collapsed ones, until no further reductions are possible.

[Jumping a few more specific steps] The final result from the minimisation of the above truth table is this configuration:

The expression indicates that IMF protest erupts when severe austerity (SA) is combined with either (1) rapid price increases (PR) or (2) the combination of prior mobilization (PM), government corruption (GC), and non-repressive regime (NR).

Marshall, G. (1998). Qualitative comparative analysis. In A Dictionary of Sociology Retrieved from https://www.encyclopedia.com/social-sciences/dictionaries-thesauruses-pictures-and-press-releases/qualitative-comparative-analysis

'Qualitative comparative analysis' is referenced in: