Evaluating with the Littlewell Working Group

ICV’s approach to monitoring and evaluation

The monitoring and evaluation (M&E) undertaken with the Littlewell Working Group in 2014-15 was one of the first examples for Indigenous Community Volunteers (ICV) of applying the participatory approach and new monitoring system to co-design short and long term indicators of change with communities, monitor them throughout the project cycle and assess effectiveness at the end.

In 2014-15, ICV embarked on two projects with the Working Group:

The participatory M&E approach was built into the design and delivery of these community-led development projects that the Working Group asked ICV to assist with.

Self-determination is central to all ICV community development and evaluation projects. In practice this means that ICV only works at the invitation of communities and all projects and M&E work are led and owned by Aboriginal and/or Torres Strait Islander people and communities.

Extensive time and energy was invested at the start of the project to understand the Working Group’s priorities, key relationships, history and cultural practices and protocols. Observation and listening were key to this process. In the words of the ICV evaluator:

“So, monitoring begins when we first engage with the community… For me, to effectively measure change we need to hear the voice of the people and to see and feel the ripples of change. Hearing the voice of the people captures a powerful picture that empowers Aboriginal and Torres Strait Islander communities to have ownership of their future to create a better and brighter tomorrow…

When a community sets their own goals, they have a much better chance of success. Most communities already know the solution to the challenges they face, all we need to do is empower and support the community to drive and own the space and the process.”
— Doyen Radcliffe, ICV Regional Manager

A combination of methods was used to collect data relating to the indicators of change: observation, appreciative inquiry, transect walking, ten seeds technique and the use of images, video and voice recorders assisted with monitoring the activities and capturing multiple perspectives and tracking the journey.

As part of ICV’s MEL Review, importance was placed on the collection of a baseline. ICV’s first encounter with the Littlewell Working Group was in 2012. The ICV evaluator describes the baseline this way:

“In 2012, I met with the former residents of Littlewell Reserve who requested assistance from ICV.  Thomas and a former resident who I will refer to as Brother Boy spoke about this pram to me and its significance to the story of Littlewell Reserve. This pram belonged to Brother Boy and as a toddler he was taken away and he lost contact with his family and the Littlewell community. Brother Boy was part of the stolen generation. Years later, Brother Boy began his journey to find his roots back at Littlewell. The pram may be only a pram but it symbolises the journey of the Littlewell peoples’ experience and where they want to see Littlewell Reserve in the future – it is the foundation of their vision – it is the baseline to moving forward and a strategy to how they will do this.”
— Doyen Radcliffe, ICV Regional Manager 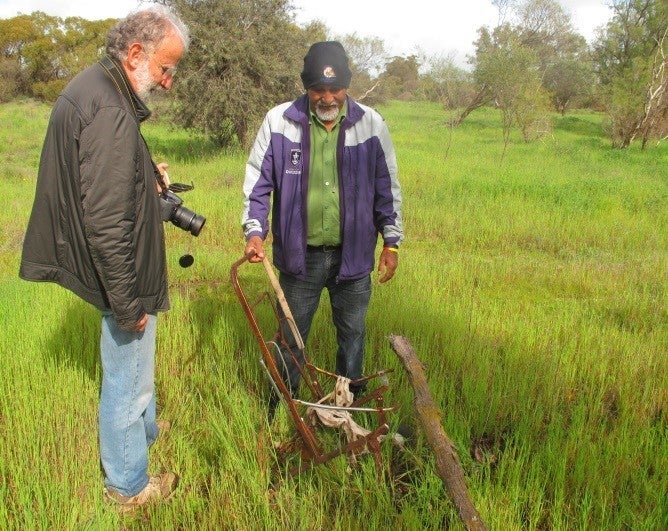 Thomas Cameron, the elected spokesperson for the Littlewell Working Group, talking with ICV volunteer Peter White in 2015. Both men are looking at an old pram on Littlewell Reserve and Thomas is explaining the significance of the old pram.

How did the approach benefit the community? How were the findings applied?

The ICV evaluator explained that the participatory monitoring approach added richness in understanding the story of the community and was useful to deal with challenges and issues affecting the project.

Participatory monitoring supported governance and decision making by clarifying multiple perspectives and was used by the Working Group to refocus or change direction as required.

The participatory approach provided flexibility and “breathing space” to track where and why some things were moving slowly, while others had traction and moved more quickly. It provided the Working Group the opportunity to own the decision-making process and solve the challenges the projects faced.

“Flexibility is the key when working with communities as the community needs to own the process, the space and vision. Rigid structures do not work as things can change.”
— Doyen Radcliffe, ICV Regional Manager

The use of technology such as voice recorders, cameras and video camera were an effective way to capture the voice of the Working Group, word for word. This avoided the need to interpret what people were saying and it was less distracting and intrusive than the evaluator taking notes while people were talking.

A structured approach that included the Working Group’s identified short and long-term indicators provided guidance on where to focus efforts, and which information to collect and record during monitoring points and throughout the activity.

Establishing the baseline was key to effectively assessing change later on as described by the community and hearing the voice of the people. It provided a clear point of comparison.

Images enhanced the participatory monitoring experience when combined with words and/or audio.

The Ten Seed technique deepened the evaluators understanding of the significance of the Littlewell project. While it was anticipated that recording the stories of former residents would be positive, questions asked in the Ten Seeds technique revealed that for some participants, recording their stories was also a difficult experience as it prompted them to revisit memories of being taken away as children. However, while it was difficult, the participants also highlighted that being involved in the project and sharing their story was healing and represented a significant step for them personally.

“It's like my sister mentioned in one of her interviews, it's a place of healing. It's a place where we've been exposed to a lot of violence, and quite a few of our family's been taken away and put into missions. But, we survived, and the reason I say we survived... They knocked us down. We've been knocked to the ground, but we got up, and we continue on fighting for something that's really close to our heart.”
— Thomas Cameron, Littlewell Working Group elected spokesperson

Key to the project was recognising the diversity of the Working Group that were no longer geographically connected. By identifying and working with the correct community member for the project, years of listening, observation and understanding were built into the project, drawing on the expertise of the elected spokesperson for the group who held this knowledge and co-designed the evaluation and project with ICV:

“I'm the sort of person, I like sitting down and listening to the old people yarning. I grew up knowing that, you know? And they've got an encyclopedia of knowledge. If we can get somebody to sit down and listen to them, they don't write it in books. They tell you the stories of the history of our people, and I guess that's rewarding to do that.”
— Thomas Cameron, Littlewell Working Group elected spokesperson

How were the ethical principles put into practice?

Referring back to the Ethical Protocol, we describe how the M&E work with the Littlewell Working Group put the principles into practice.

Aboriginal and Torres Strait Islander peoples have the right to self-determination and to be encouraged and empowered in decision-making processes. Evaluators must listen and advise to the benefit of communities above all else.

ICV was invited to work with the Littlewell Working Group after ICV spent time explaining how they would work with them, the benefits of the projects and how M&E would be used throughout.

The Working Group co-designed the project and M&E activities by prioritising the objectives and indicators for the project.

The Working Group participated in participatory monitoring sessions using the Ten Seed Technique where they collectively determined what had been achieved and what the future direction for the Working Group would be.

Capability strengthening that was meaningful to, and requested by, the Working Group was built into the project: partnership brokering, videography, interviewing and grant writing skills.

Recognise the diversity and uniqueness of First Nations Cultures, Peoples and Individuals.

Observation was used extensively at the outset to slow down and take the time to understand the sensitivities of the project and the hardship and trauma that the Working Group had experienced.

Understanding the diversity of the Working Group and their history was key to this project, particularly as members of the group were no longer geographically connected together. ICV invested time to establish that their key contact did have the support of the wider group. The elected spokesperson for the group had invested much time and energy into travelling to visit group members and ensure the views and aspirations of the group members were reflected:

“I'm always saying ‘we’, but there has to be a leader somewhere to put this infrastructure into place, in a common sense way, and I was elected to do this so, in my view I didn't give up on the Mingenew mob, and living out of a suitcase, but the commitment made towards a vision, a dream, and listening to our elders gave me that vision and dream… the infrastructure in the beginning, the foundation, is to talk and consult with members before we go to government representation or to local government which was Mingenew Shire, at the time. And through consulting with, first and foremost, talking with our elders, and bringing it to their attention that we want to start working on Littlewell and try to preserve it. So, I would say, talk with the local community, and the local community are the key players in this respect…” – Thomas Cameron, elected spokesperson for the Working Group

ICV also informally confirmed that they were working with the elected spokesperson for the group through observations and interactions with group members.

A special thanks to this page’s contributors

We would like to acknowledge and thank Maria Stephens, an Arrabi/Binning woman who speaks the Iwaidja language. She generously provided her artwork for this page.

These are good practice examples of evaluation and participatory monitoring with Littlewell Working Group. These examples are part of a bigger project which seeks to share examples of good evaluative practice from community across Australia.

'Evaluating with the Littlewell Working Group' is referenced in: