It focuses on a process of iterative comparisons between different subjects around a shared theme (decisions, plans, actors, etc), typically written on cards that are in turn sorted in line with the participant’s own value judgments, criteria and standards. Primarily intended for use with single respondents, HCS can be easily adapted to a small group setting, and is used as a central component in the creation of treemaps. The method was developed by Rick Davies and was influenced by the work of Gregory Bateson.

The steps to hierarchical card sorting are:

The result of the card sorting exercise is called a treemap, which can be summarised in Excel (rows = cases, columns = successive sorts, cell contents = differences), as shown in the example below. Consequences of the differences can be inserted as comments in the relevant cell, or as different coloured text in the same cell as the difference.

For evaluation-based discussions, some additional steps are needed. After producing a treemap, call the participant’s attention to the results of the first sort and ask evaluative questions such as “which of these two groups were most successful?” Then move to the second level of sorting and ask the same question about the results of each of the two sorts at this level, then move to the next level and so on.  The answers will enable all the groups of cases to be sorted in rank order, from most to least successful. This process is extremely adaptable to whichever evaluative factors the investigator is interested in exploring. PS: In addition to asking about relative success, the answers can be followed up with a “Why do you think so” question.

In 1994 a senior CAA staff member in Bangladesh was interviewed about the NGOs that CAA was funding, using the HCS method. The treemap below shows the results. After the sorting exercise was completed he was asked which types of NGOs he would “most like to fund in the future”, starting with the first two groups on the left, and then progressing to the right. Green cells represent the preferred types in each set of two kinds of NGOs. The ranking on the right is evident from all the binary ranking choices. There is one set of tied ranks (5.5), where the respondent could not make a choice. 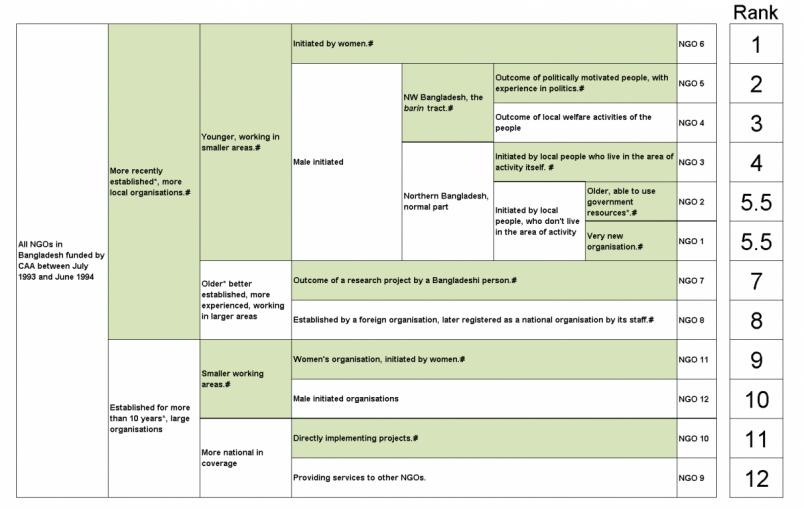 The same treemap could be revised some time later, to seek judgements about the relative performance of the categories of NGOs

Harloff, J. and Coxon, A.P.M. (2009). How to Sort: A Short Guide on Sorting Investigations. Retrieved from http://www.methodofsorting.com/HowToSort1-1_english.pdf

'Hierarchical card sorting' is referenced in: